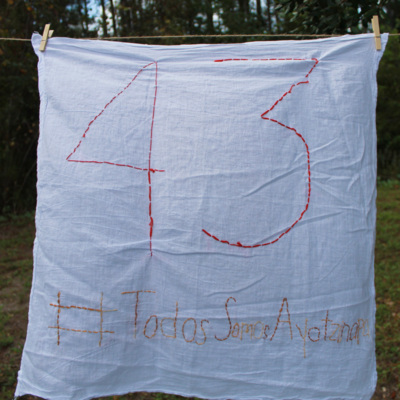 "We Are All Ayotzinapa "
Forty-three male students were kidnapped from the Ayotzinapa Rural Teachers' in Iguala, Guerrero, Mexico, and disappeared on September 26, 2014. The official investigation concluded that the students were taken into custody by the local police and then handed over to the Guerreros Unidos crime syndicate and murdered. The authorities claim that the kidnapping was planned by the mayor of Iguala, Jose Luis Abarca Velazquez and his wife, but there are also claims the Mexican Army played some part in it. The students were on their way to Mexico City for the anniversary march of the 1968 student massacre in Tlatelolco, which had occurred when the government tried to suppress political opposition.